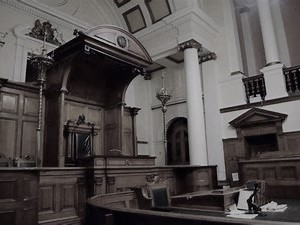 We always encourage people when they come on nights to take photos . In particular to take several pictures in a row. This is because it may show changes or movement of anything captured.
This photo taken by a London lady Polina Perry when she visited the Galleries of Justice on Friday 31 July 2017.

Polina said “It was pitch black, I couldn’t see anything, even when the flash lit the corridors up. It wasn’t until I uploaded the images from my iPhone onto my computer I was able to see I had captured a ghost.

“On both images you can see a face and his arms resting down on his knees as he is leaning against the wall.
“The weird thing is that his facial expression changes.
“There was only a few seconds’ gap between the two snapshots but the ghost looks really aggressive on the second photo – as if he is very unhappy that I blinded him with the flash twice.
“I’m lucky I took two images and not just one.”

The fact that polina captured the two and both show a change from each other makes these pictures that bit more interesting.
What do you think ?
More ghost captures from the galleries coming up on this page.
If you want to come here on a hunt on Saturday 6th of May there are still places

Available at this fantastic place and widely regarded as a VERY haunted location.
Nottingham galleries ghosts seem to not be camera shy with it having some of the most interesting and numerous visitor captures.