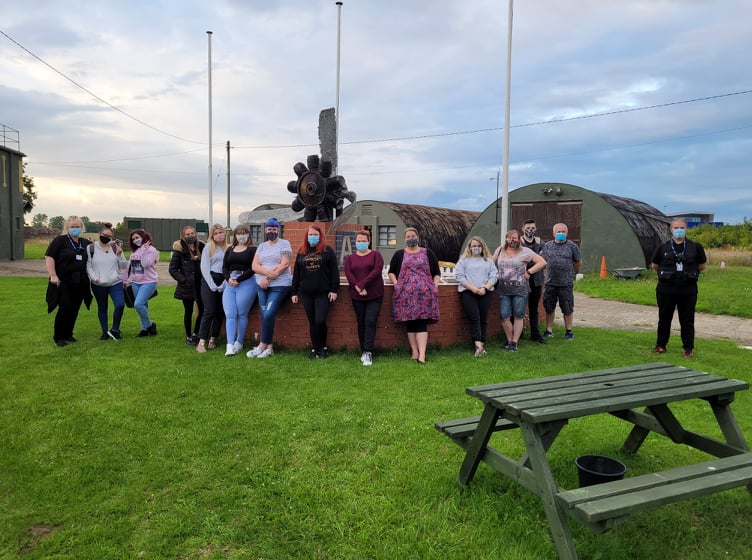 First Session of the night

Group A heard a few taps while investigating the tower. At one point two guests was in one room asking if the spirits could touch someone in the other room. When they guest regrouped a lady that was in a different room said she felt something touching the back of her neck. The group was amazed this happened on demand.

Group B was using an Ouija board throughout their investigation of the canteen they had a lady come through, but couldn’t really make out the name, also had a child come through that was 5.

In the simulator room one of the guests used a crystal pendulum had a good response they had a lady came through unfortunately no information was collected on the spirits that came into contact with the group. The group also felt cold spots throughout their first session.

In the Nissan hut the group were using an Ouija board when a man came through asking the group to put the SP7 Spirit box on AM and he was speaking to them on the spirit box and the Ouija board at the same time with the same answers, no name but his job was in communications. The group also had a lady try to communicate with them while on the Ouija board. The lady was in the Army medical corporation, once again no name was given. One of the guest experienced pain in the left breast only to find out the lady who they were talking to on the Ouija board had sadly died from breast cancer.

In this session the group did a fantastic experiment, where one guest wears noise cancelling headphones listening to a spirit box while the rest of group were asking questions. As answers where coming through the spirit box the guest hearing them was call them out aloud. A few different spirits came through but one wasn’t too nice and called the guest a WANKER.

In this session one of the guests happened to be American and as soon as he walked in the control room his temperament changed. Not knowing anything about the tower he walked in and he felt as if he was going to get told off for something, he felt belittled, and the atmosphere was very heavy round him. The group straight into some table tipping they got the table moving a little. One of the guests took his dog tags off from around his neck and held them out in front of him they were moving from side to side. He felt very hot at the same time. As the guests sat in the control rool they could hear taps in the room and some felt static down their arms. One guest was down stairs in a room doing a loan vigil in a small cupboard space. He was calling out and could hear a lot of muffled noises footsteps in the room he was in. He also saw white lights with is own eyes. Some would call them Orbs if caught on camera.

The group used an Ouija board, had a spirit come through that wasn’t very nice, told us to get out the room, we did do what we were told, just for a minute as one of our lovely ladies was being affected. The group also had a lovely personal message come through for a guest.

Two of the group used the REM pod and k2 in the Canteen, got a spirit called Peter come through, also had spirits of relative’s come through.

The other two guests were in the simulator room with the crystal pendulum.

Guests where using an Ouija board when the name Eddie came through who aged 68. He  was a soldier. The guests stood in a row either side of the display table and closed there eyes and waited to see if they picked up on anything. One guest did feeling cold down right hand side.

Group C where doing plenty of calling out when a shadow of a tall man was seen beside Tina at the same time she felt static all over her body. It made her feel unwell so we went to sit down, As she went to do so her chair moved backwards and she ended up on the floor not being able to get up. Earlier in the night she shouted out “push someone” She believes the spirit pushed her. Another guest see her chair move on its own. Safe to say the whole group could not believe what had happened.

All in all, another great night at Rougham Control Towers! A location that just never disappoints.